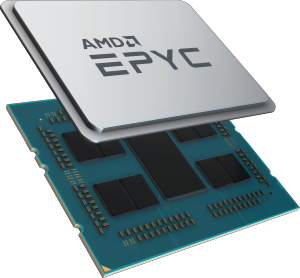 AMD released second generation Epyc CPU 7002 series (code name “Rome”) based on 7 nm technology. These new processors can contain up to 8 die and one of I/O die, which are interconnected via AMD Infinity Fabrics. This allows AMD to offer up to 64 cores per processor.

This new generation processors enables to use DDR4 memory up to 3 200 MHz frequency, support PCI-E 4.0 delivers double the I/O performance over the old one generation or eight memory channels (DDR4) per processor.

Currently the most deployed servers are dual processors (CPU). The newly announced AMD generation processors can change the dual-socket ratio in favour of single-socket servers. AMD claims that the performance of single-processor server may be similar in some applications to performance of double-processor Intel servers moreover with the lower power requirements and attaches the following comparison.

In connection with this comparison may be interesting the Lenovo’s announcement about introducing its first servers with AMD processors — single based processor: https://lenovopress.com/lp1197-whats-new-amd-1s-launch.

M Computers is an AMD Elite partner for Epyc processors. If you are interested in testing the new AMD processors let us know.