30 years of ThinkPad: the confidence you can count on

The ThinkPad brand is celebrating an incredible 30 years this year. Over the past three decades, it has gained a solid position and extraordinary popularity on the market. And as conservative as it looks, it has never been afraid of major innovation. Here is an overview of the most important milestones in the history of the brand.

The first ThinkPad model was introduced by IBM in October 1992. The premiere series was called 700 and was unique at first glance. A twenty-five-megahertz processor along with four or eight megabytes of RAM and a huge 120-megabyte disk. Plus a 10.4-inch, 256-color(!) screen with 640×480 pixels. It seems ridiculous to us today, but back then it was absolutely impressive for a portable device.

The first ThinkPads did not deviate from the standards of the time in terms of design, but they had one major thing that distinguished them at first glance. That was the revolutionary Trackpoint – that red ball in the middle of the dark keyboard that replaced the mouse and ruled laptops for years before it was displaced by the now-familiar touchpad. Today it is one of the brand’s symbols and still a very practical control that comes in handy. In the context of the time, it was an exceptional machine not only in terms of hardware, but also in terms of market development and trends. Computers were on the rise and ThinkPad set the direction they would take – powerful mobile devices. ThinkPads have quickly become synonymous with laptops, innovation and smart solutions.

Design aside, ThinkPads were known for their durability. The laptop’s magnesium chassis was absolutely formidable and became a legend of sorts. The quality of workmanship was also noticed NASA and just a year after the first ThinkPad was introduced, its successor model 750c discovered as a working tool of the crew of the space shuttle Endeavour. First for the Hubble Telescope repair mission, during which ThinkPad was used to test the effects of cosmic rays on electronics, among other things, and then for dozens of other flights.

The ThinkPads were also popular with Roskosmos, which operated ten ThinkPads 770 on the Russian space station Mir. The European Space Agency hasn’t been left behind either, and ThinkPads were for a long time the only laptops certified to operate on the International Space Station – they’re working on them there now. 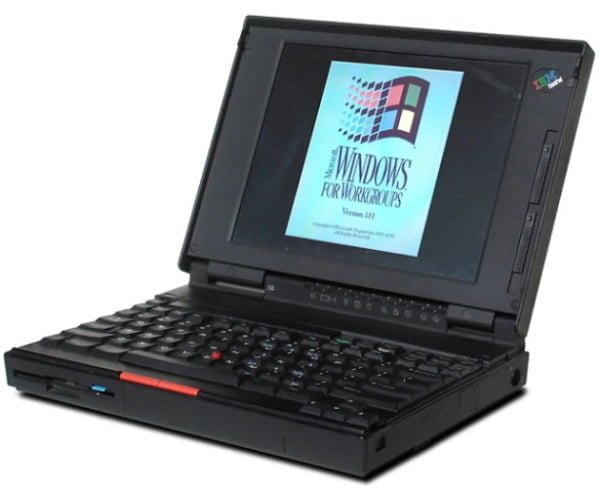 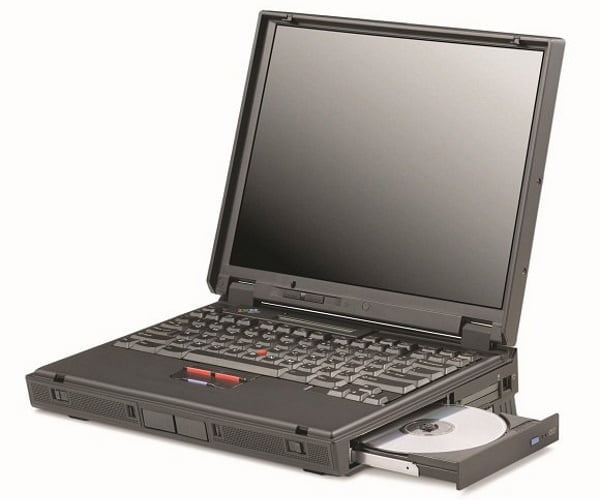 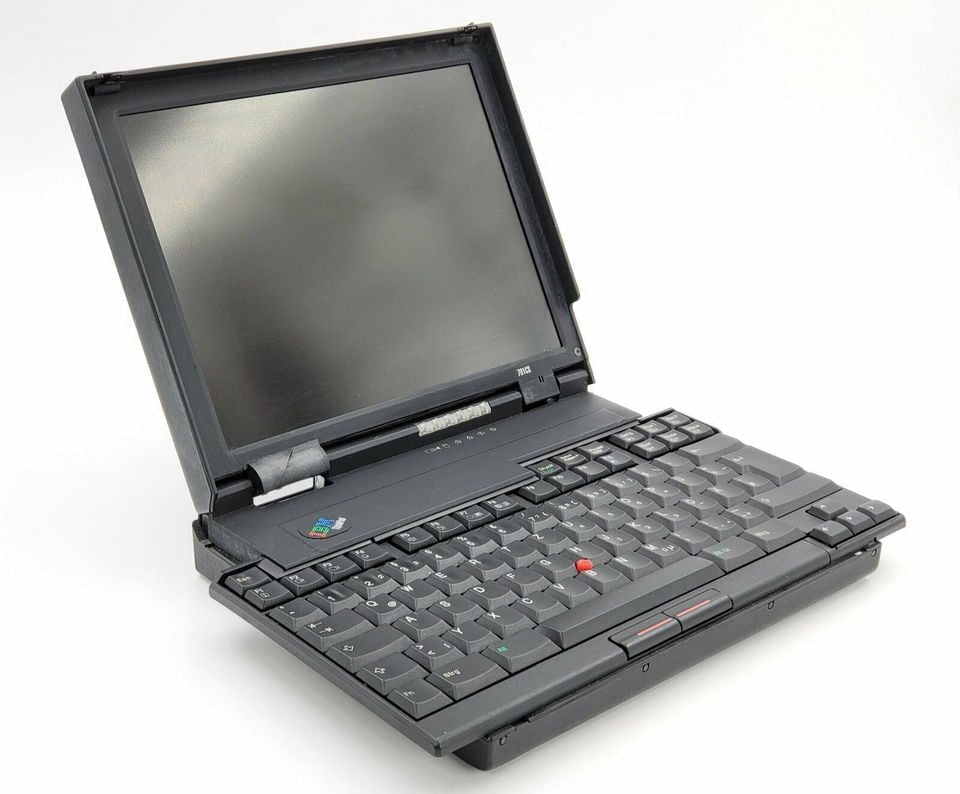 Some of ThinkPad designers’ historic ideas were highly original. For example, the “butterfly” ThinkPad 701C has appeared. The small body housed a full-size keyboard that unfolded itself when the laptop was opened for more comfortable typing. It even earned him an exhibition at the Museum of Modern Art in New York. Other models allowed, for example, the screen to be transformed into a projector. Others were equipped with a modular UltraBay slot, which allowed a module to be inserted with, for example, a network card or floppy disk drive – depending on what the user needed at the time.

However, the 550BJ model from 1993(!) with an integrated Canon printer can be considered the pinnacle of originality ! Less original, but ultimately more fundamental in the development of notebooks, was the ThinkPad 770 of 1997: the first machine with an integrated DVD drive. And the ThinkPad 560 was exceptionally mobile for its time, weighing less than two kilograms and about three centimetres tall.

But it was already approaching the year 2005, with which ThinkPads came under Lenovo. Just before that, however, the T42 appeared, which brought an integrated fingerprint reader, and also the X41 Tablet. At first glance, it’s a classic ThinkPad, but you could flip the display, flip the keyboard and simply turn it into a tablet. Today it is commonplace, back then it was literally a revolution. 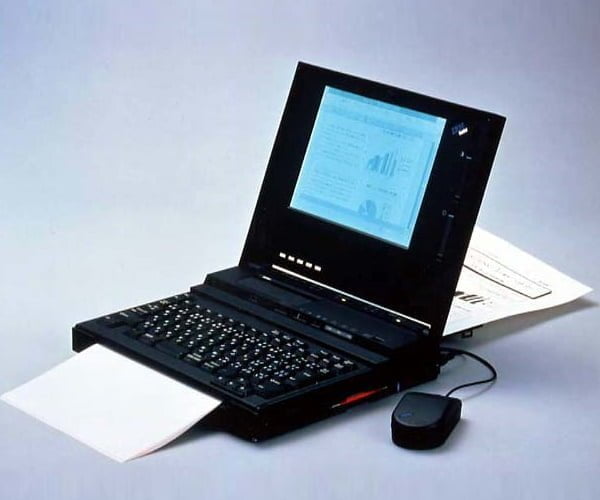 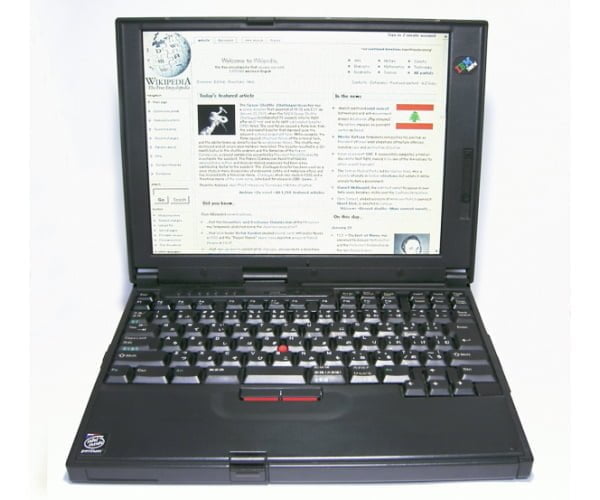 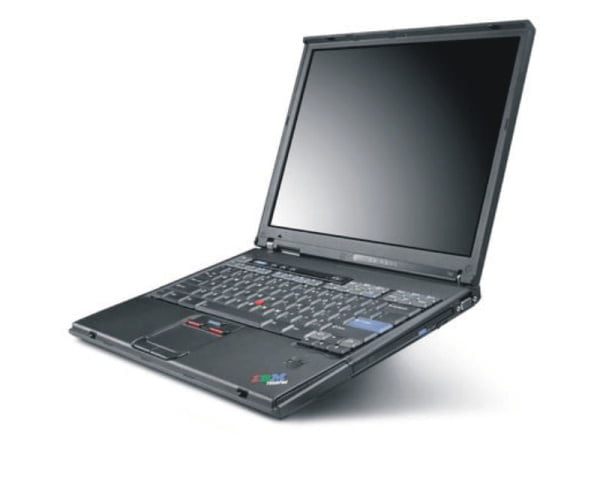 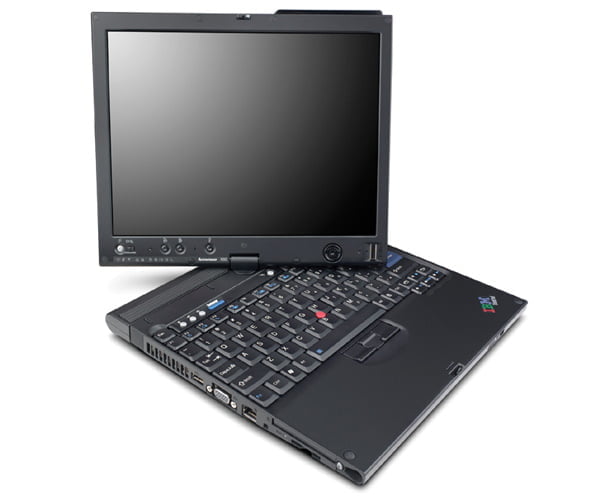 Transition from IBM to Lenovo

In 2005, Lenovo took over PC and notebook production from IBM. Lenovo paid $1.75 billion for it and became the third-largest computer manufacturer at the time, behind Dell and HP. Lenovo’s ambition even then was to become the market leader – and the ThinkPad brand was supposed to help them do that. It did, and in 2015 ThinkPads celebrated 100 million units sold.

This year marks another milestone in the brand’s history. A staggering 200 million ThinkPad devices have been sold.

Lenovo has continued the trend of lightweighting in its era. Metal alloys were replaced by carbon fibre in 2008, bringing the ThinkPad X300 to a weight of 1.3 kilograms that wouldn’t be out of place in today’s lightweight line-up. Four years later, in 2012, the thinnest ThinkPad yet, the X1 Carbon, was launched. And it has become a big driver of the brand until today and has seen several changes and improvements. It is now in its tenth generation. The range of models has expanded considerably, so there is now something for every customer. Still, if you want the best for working in any environment, ThinkPad is the ideal tool – from the desert to the top of a mountain or into space.

Since 2007, ThinkPads have met the MIL-STD 810G standard, known to phone enthusiasts for example. It says the device can handle shocks, drops, dust, moisture and extreme temperatures. It’s a philosophy that harkens back to the brand’s cosmic beginnings. 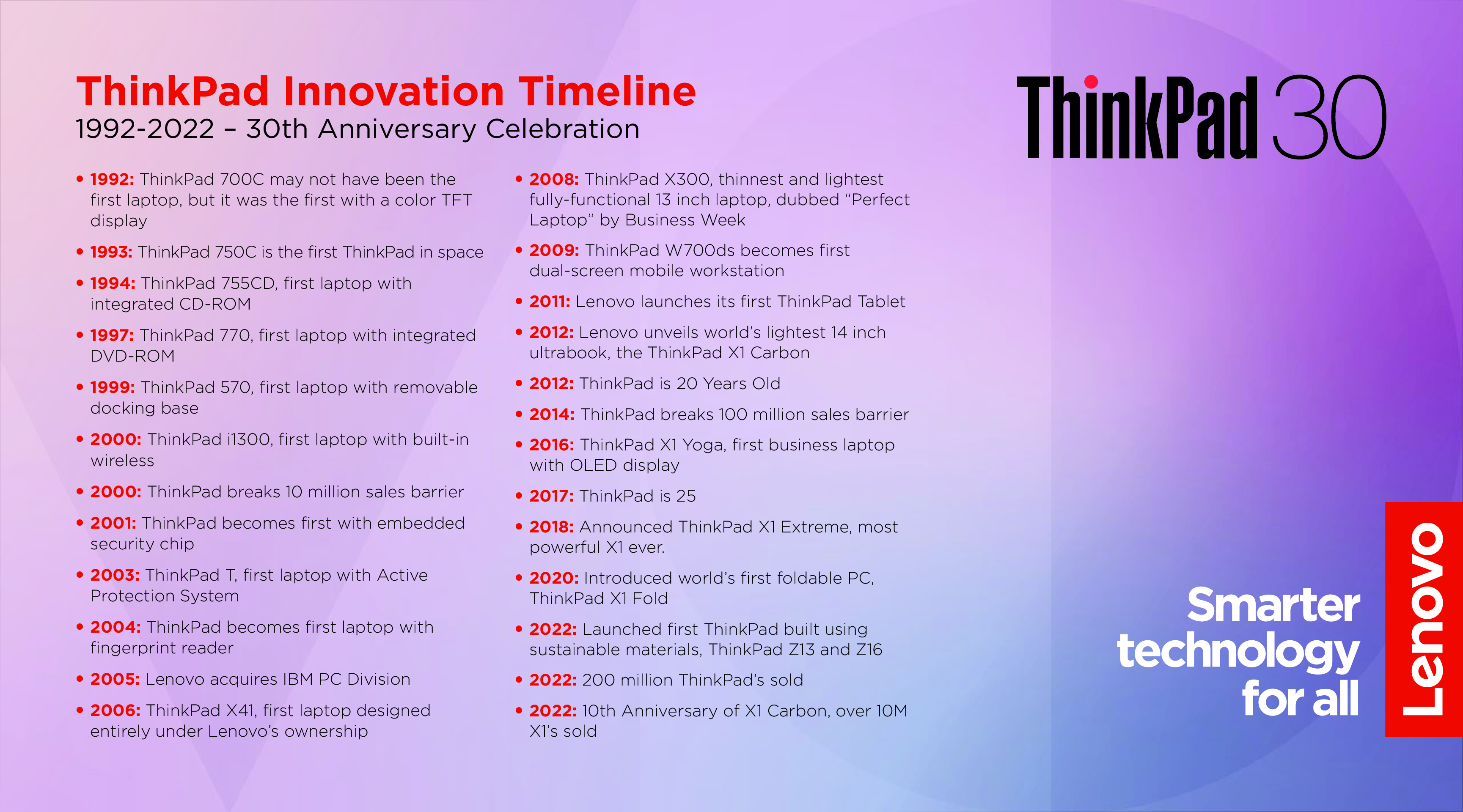 What is planned for the future?

Lenovo has already outlined the future in 2020 with an unusual novelty. They were the first manufacturer to introduce a laptop with a foldable flexible display. Lenovo
ThinkPad X1 Fold

brought a phenomenon to computing that still stirs great passions in the mobile phone market today. A flexible screen that turns the device from a flat tablet mode into a laptop with a virtual keyboard in one motion. Or a book for easy reading. And it does this without interrupting or distorting the image at the bend. It was the first flexible swallow that set the next trend.

So the future is flexible and the ThinkPad will be a certainty. Over the past 30 years, ThinkPads have built a reputation as work tools for professionals. A supremely practical machine and iconic black colour. ThinkPad is literally the enemy of trends, clichés and fickle fashion. Yet it manages to be original, modern and innovative. It doesn’t mimic the competition. He’s going his own way. These principles have guided the brand’s designers ever since.

If you are interested in the latest news or proven ThinkPad machines, come to our branches in Brno and Zlín. We are one of the largest suppliers of Lenovo products on the Czech market and as a Lenovo Platinum partner we are able to provide you with the best possible range of Lenovo products including express warranty and after-sales service and spare parts. We also operate an internet e-shop Lenovoshop.cz.

Can we help you choose the right ThinkPad device for you?

Take a look at Lenovoshop.cz or contact us directly. 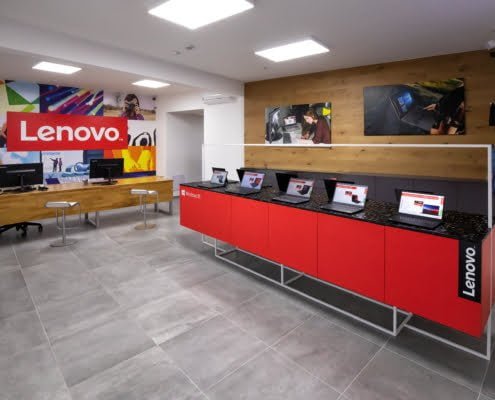 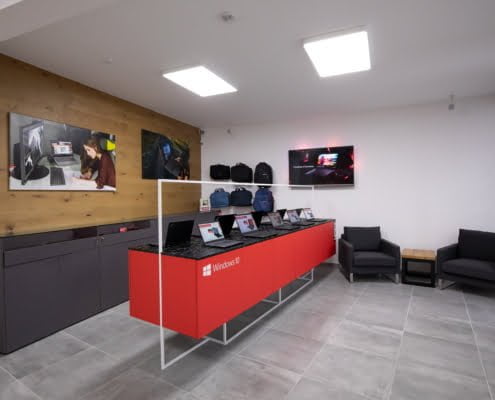 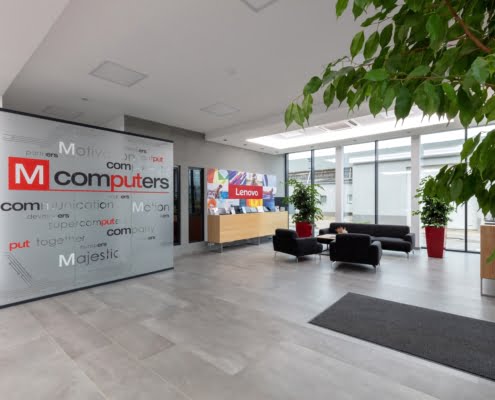 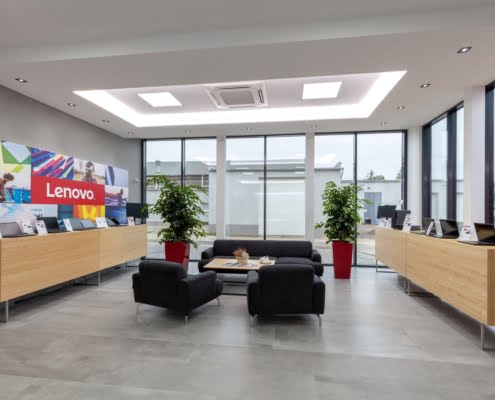 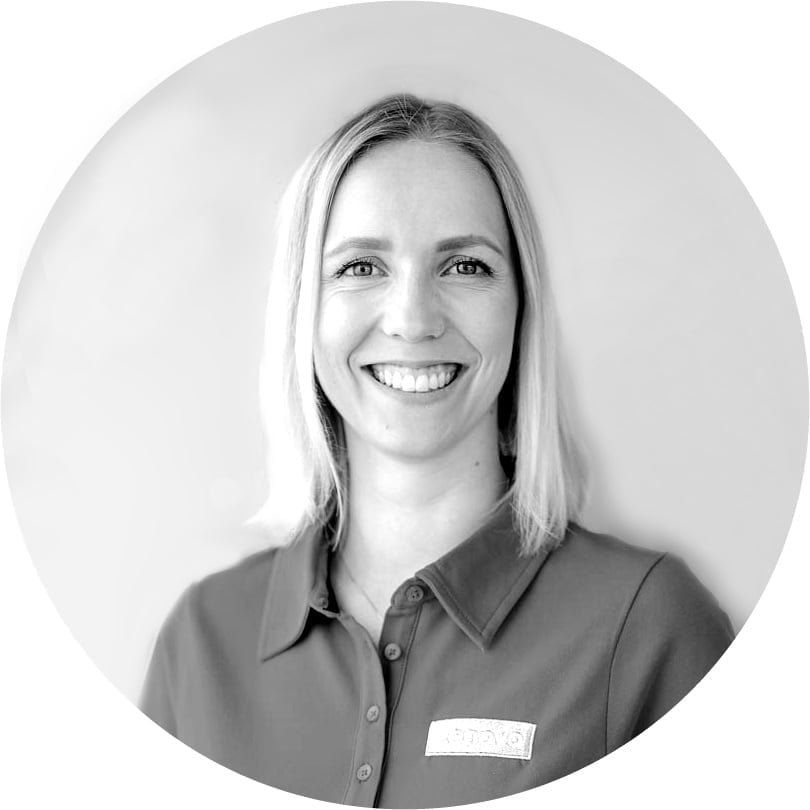